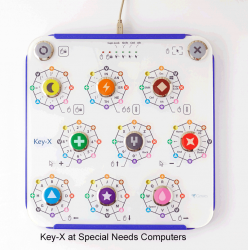 Communication – Autonomy – Education – Rehabilitation: Key-X is the world's first keypad that gives people with cerebral palsy, tremors, Parkinson's, Multiple Sclerosis, Alzheimer's, Down Syndrome, autism, and other motor, physical and intellectual disabilities autonomy to use and control any computer, smartphone or tablet.

Empowering Assistive Technology: Instant access to any computer. Control computers with the slightest movement, without installing any program.

Key-X Multifunctional Smart Keyboard: gives you every keyboard and mouse functions in eleven large, touch-sensitive keys that can be triggered even by the blink of the eye.

Immediate communication for those that cannot speak: Earn your voice with the TelepatiX app for Android devices. Write and vocalize sentences by choosing letters of the alphabet by scanning, with light touches on the screen, in the blink of the eyes, or with minimal movements. Created to help people that can’t speak and have very limited movements, like patients with Amyotrophic Lateral Sclerosis (ALS) and those afflicted with Cerebral Palsy or sequels from a Cerebrovascular Accident (stroke). TelepatiX makes it possible to easily write and vocalize short sentences. A smart predictor completes the most common words and phrases, speeding up the communication.

The device that redefines the inclusion of people with disabilities. By itself, Key-X is an innovative resource, which gives autonomy to people with any motor limitation to control any computer. However, offering every function of keyboard and mouse with total accessibility is just a detail. With just eleven touch-sensitive keys, which can be triggered even by the blink of an eye, Key-X does much further. In conjunction with the Simplix software and its accessories, Key-X makes up an amazing platform of school inclusion and rehabilitation, capable of developing the motor and cognitive skills of students and patients with physical and intellectual disabilities. 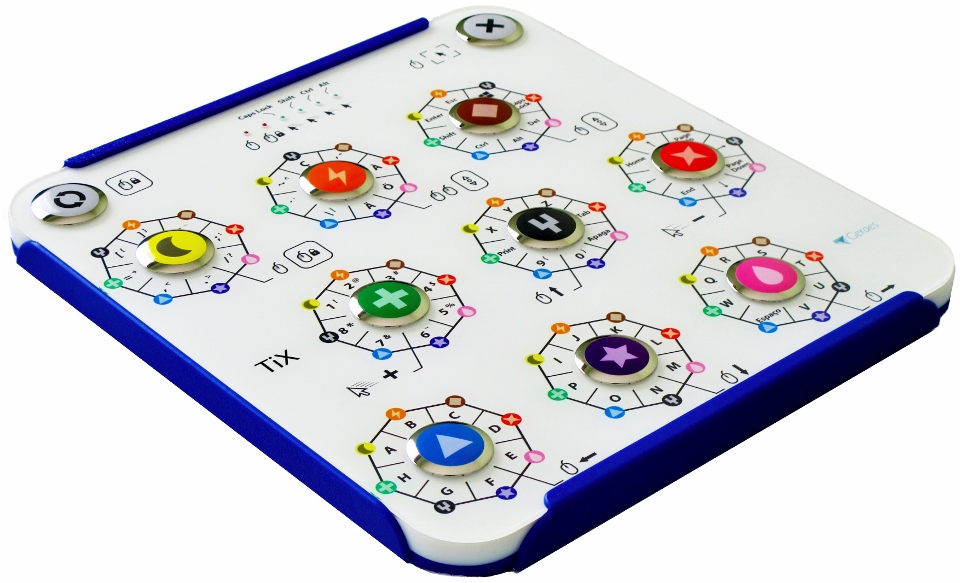 Multi-use: one device allows complete typing and full control of the mouse pointer, obviating the need to occupy the screen with virtual keyboards and other accessibility resources for typing and navigation
Multi-platform: the same equipment can be used in different types of devices, such as computers, notebooks, tablets, and smartphones
Multi-user: Key-X Smart Mouse-Keyboard is designed to address many types of physical and motor disabilities, even the most severe cases of paralysis. Using external triggers as accessories (not included), Key-X allows the computer to be used even with the blink of an eye

Create interactive boards on the spot

Dragging pictures and sounds to a virtual board on the computer screen, the professional creates unique psychomotor activities in a few minutes.
The student or patient then interacts by associating the images and sounds of the virtual board with the colored symbols on Key-X Smart Keyboard.

Write much faster with Key-X, with less effort
FluentiX is a typing assistant with integrated text prediction, created to increase typing speed and decrease the effort spent in typing for who uses the Key-X keyboard.
This software facilitates the writing of texts, suggesting frequent word used by the person. When typing a word, if FluentiX’s suggestion is desired, you can quickly complete the word by simply playing in sequence the two keystrokes indicated next to the suggestion.
Moreover, FluentiX learns frequently used words, making the writing even more fluent with time.
FluentiX works with the Windows operating system since Windows XP and can be downloaded here.

The application receives an alphabet, where the user may choose the letters in two different ways:

Indirectly, through a sequential scan of lines and columns. To select, just touch any part of the phone or tablet screen. It is also possible to select without touching the screen, using the blinking of the eyes (through the a-blinX accessory) or other voluntary movements (other switches).

Touching the letters directly, in this case, the application filter the involuntary activations from people that have no fine motor control.

Communicate with just a few movements: rite and vocalize sentences with the smallest possible movement, choosing the letters of the alphabet by scanning, on the screen of any Android phone or tablet.

Free the Mind: People with severe movement limitations can communicate with people around using TelepatiX. The application is smart, autocompletes words and sentences, and learns by itself your most frequent vocabulary.

Any voluntary movement is enough: In order to be able to communicate using TelepatiX all that is needed is just a light touch at any point on the screen of your smartphone or tablet.
If that is not possible, no problem. Instead of touching the screen, just use a trigger like the blinking detector a-blinX.

Basketball (Perfect Fall): Throw the ball towards toe basket by simply blinking your eyes with a blinX or with the mose click

Chef (Chef Jump): Take single or double jumps by simply blinking your eyes once or twice with the click of the mouse

Bird (Blinky Bird): Make the bird fly by simply blinking your eyes with the a-blinX or with the mouse click.

Knife Smash: Throw the knifs on the moving wheels by simply blinking your eyes with the a-blinX or with the click of the mouse.

Seal (Artic Pong): Jump with the Seal on the trampolines to pick up coins, blinking your eyes with the a-blin-X or with the mouse click to change direction and avoid the bears!

Bottle (Guns n' Bottles): Shoot the bottles on the go by simply blinking your eyes with the a-blin-X or with the mouse click.

Zigzag (Zig-Zag Line): Use the blink of an eye with a a-blinkX or the mouse click to change the direction of the colored stroke and make it touch the cubes of the same color.

Puzzle (Kids nAnumal Fun): Drag the puzzel pieces correctly over the figure of the animals to rebuild the drawing! Use tix click and drag function.

Memory (Kids Cute Pairs): Click on the cards to untap them and find pairs in this Memory game! Use the TiX mouse function.

Farm (Farming 10x10): Line up the blocks on the plantation to harvest the farm! Use trix click and drag function.

Highway Road Fury: Move trhe car to the left or right to shoot the other vechicles while speeding down the auto-lane! Use tix click and drag function.

Galaxy (Galaxy Warriors): Move the ship to the left of right to destroy the alien ships! use tix click and drag function.

Born in 1997 in Salgueiro-PE and currently studying Computing at the Federal Institute of Sertão Pernambucano, Daniel uses the computer to perform research, write texts and learn how to use graphic applications such as Photoshop: all of that with the help of Key-X, controlled with the blink of his eyes captured through the a-blinX switch.

Moreover, in order to communicate, answer questions and manifest his characteristic sense of humor, Daniel uses the TelepatiX app on an Android tablet connected to his a-blinX =)

Admitted at the entrance exam in 2018, student Gabriel Vinícius spent 18 years with no autonomy due to Cerebral Palsy. ...

Since the end of 2017, however, he can communicate using words with the TelepatiX app, which translates into words and voice the commands given by the blink of his eyes, captured with the eye blink switch a-blinX. 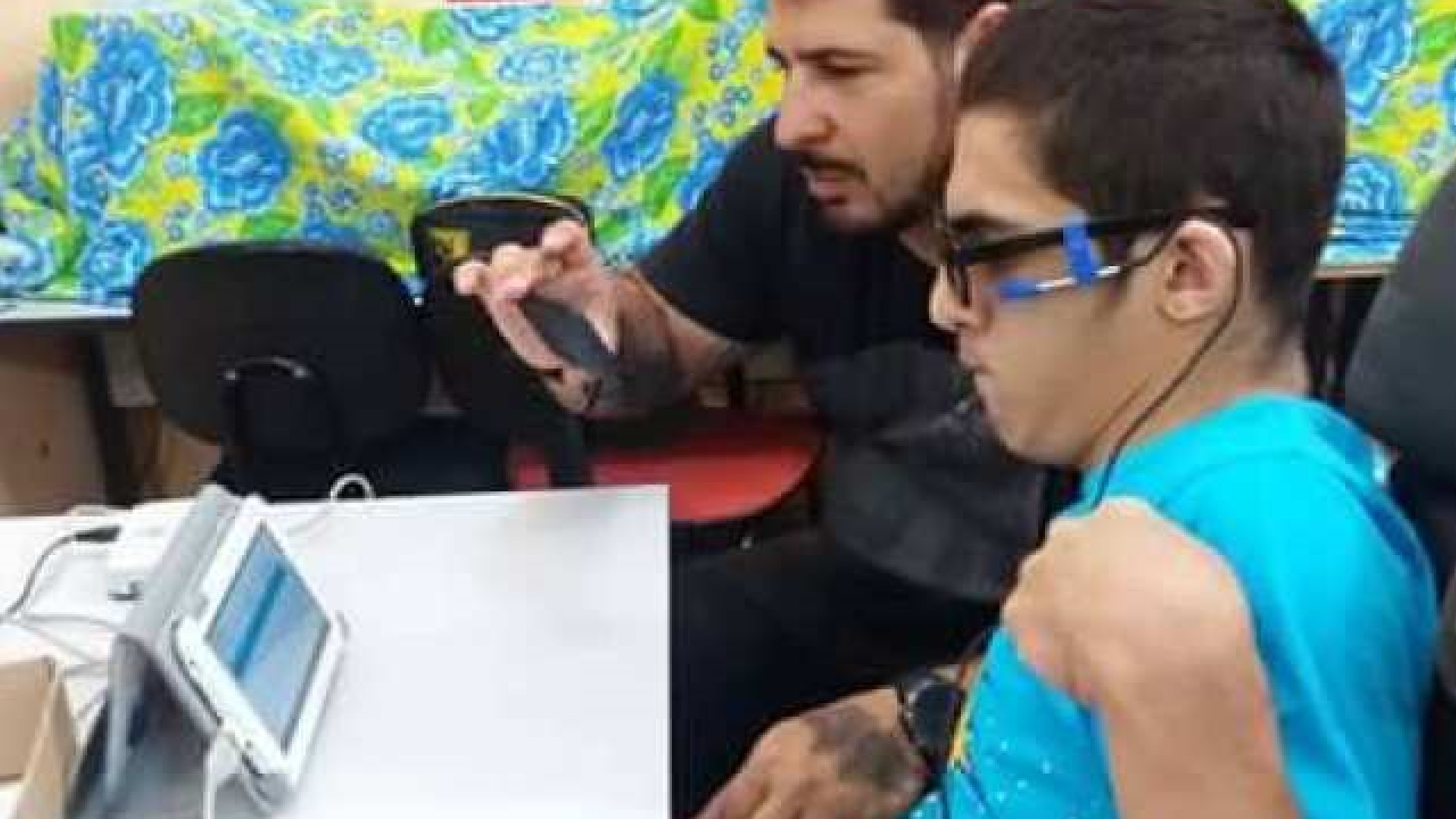 Young Marina lives in Tatuí-SP. In April 2015, she received from her father the recently released key-X, in fact, the very first of all! 🙂

Two years later, Marina presented her undergraduate thesis at FATEC, where she spoke about the importance of Assistive Technology for the autonomy of people who, like her, have Cerebral Palsy or other motor disorders. 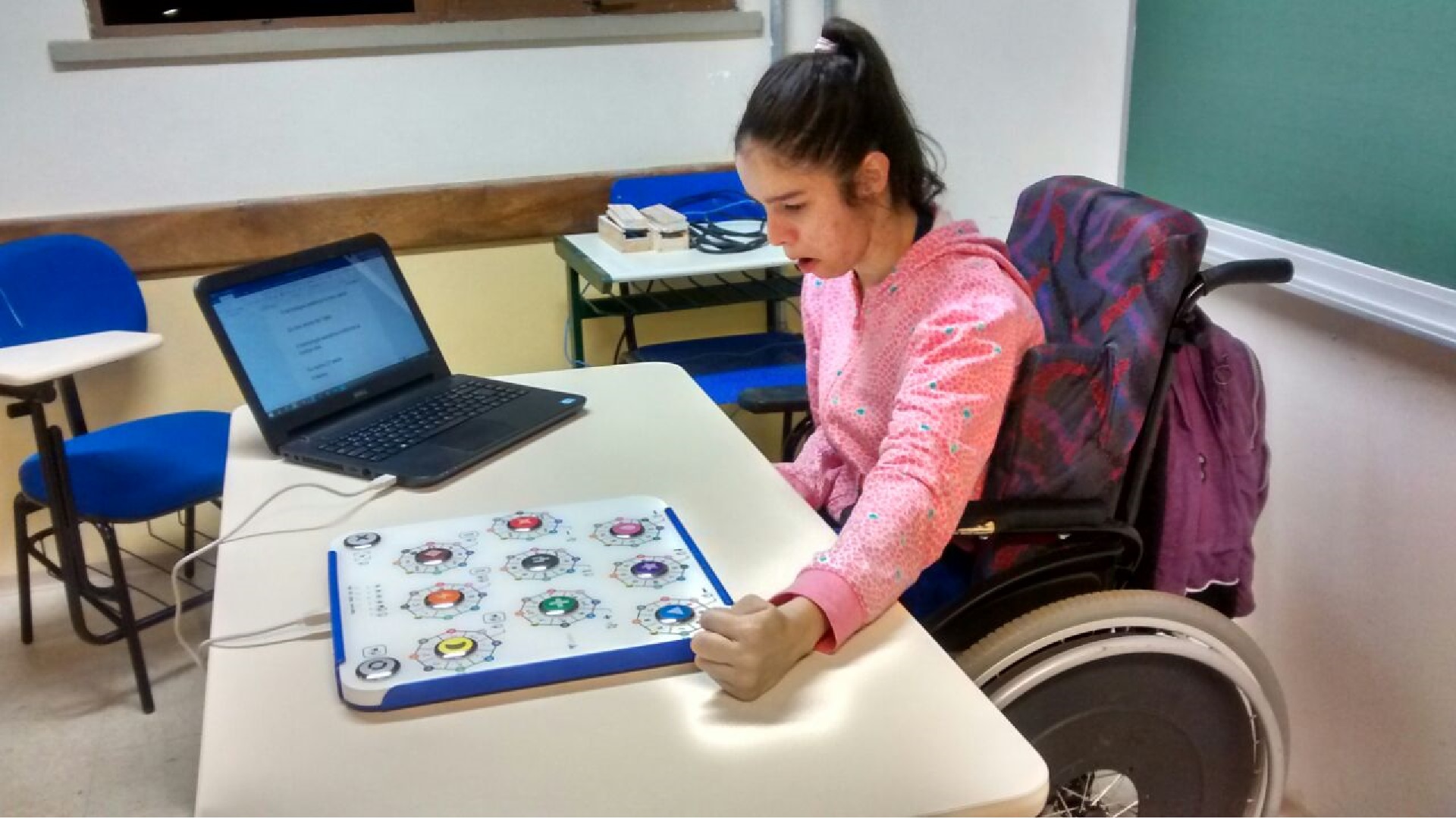