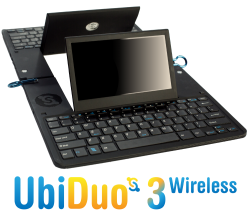 sComm once again pushes forward the state of the art in face-to-face communication technology with the launch of the brand new UbiDuo 3. Loaded with more modern innovations than its predecessors, the UbiDuo 3 makes it easier than ever for people who are deaf or hard of hearing to participate in a dynamic, fully engaged, face-to-face conversation with the rest of the hearing world.

Our talented engineering team has refined and enhanced several of the original UbiDuo features, while retaining the critical components that give the UbiDuo its mojo, such as the real-time split screen interface and the encrypted low-frequency wireless radio signal between the two halves. The patented hinge system has been revamped into the new finger loop hinge, the color screen has evolved from a resistive touch screen to a much more responsive capacitive touch screen, and each half of the UbiDuo 3 has been slimmed down to an ultra-lightweight 1.9 pounds each (3.8 pounds total per unit).

Standard wireless network connection - 2.4GHz wireless transceiver, capable of maintaining a connection at up to 300 feet between units.
ARM Cortex A5 CPU - speedier processor makes the UbiDuo 3 more responsive and snappy.
1Gbit DDR2 RAM - provides more work area for the UbiOS 2 operating software to do its magic.
4GB total storage - gives you the ability to retain and store long conversations, as well as more of them.
7-inch diagonal color LCD capacitive touch screen - Capacitive touch means the screen is just as responsive as your phone or tablet.
8-hour lithium-polymer battery pack - carry on long conversations without worrying about whether your battery might run out of juice in the middle of a sentence.
Under 4-pound total weight (1.9 lbs per half) - easily take your UbiDuo 3 wherever life takes you.
USB-C port for charging - standard ports and cables make it less likely that you’ll be left with an empty battery and no way to charge it.
USB type A port for connecting flash storage - save your conversations on a thumb drive if desired.
Mini-HDMI port for connecting a TV or projector - great for classes, demonstrations, any situation where you might need to share your conversation with an audience.
Patented finger loop hinge technology - keeps your UbiDuo 3 halves securely connected or lets you to easily pull them apart as needed.
Anti-theft slots in each half - great for public environments where your communication devices need to be anchored.
UbiOS 2 - the next generation of the UbiDuo operating system.
Real-time split screen interface.
Customizable fonts (12-point to 72-point).
Customizable text and background colors.
Password protection on saved conversations.