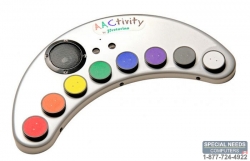 The AACtivity Communicator & Musical Instrument is a highly versatile communicator and musical device with eight buttons, 8 levels and up to 8 minutes of recording time.

The AACtivity Communicator also benefits from 64 pre-recorded sounds arranged in 8 categories. Supports single or two-switch scanning and can also be used with SimplyWorks wireless switches.