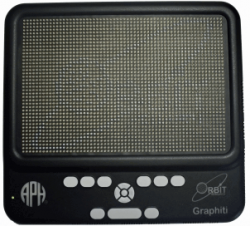 Access to any form of Graphical information
A touch interface to enable the user to “draw” on the display
Independently refreshable pins in a 60×40 array
HDMI input to connect to any computer or mobile device
Cursor pad for Navigation, and an SD-card slot

Graphiti is an Interactive Tactile Graphics Display based on revolutionary Tactuator technology from Orbit Research. It represents a breakthrough in non-visual access to any form of graphical information such as charts, drawings, flowcharts, floorplans, images and photographs, through an array of moving pins.

The Tactuator technology provides the ability to set each pin to different heights, which enables the display of topographical maps and other graphical elements such as grey shades and color represented as varying heights of pins that can be readily sensed by the user’s fingers.

Graphiti features a touch interface to enable the user to “draw” on the display; tracing a shape with a fingertip raises the pins along the path traced. The touch interface allows traditional forms of touch commands such as scrolling, multi-touch gestures such as pinch-to-zoom, etc. In addition, it enables novel uses such as “pushing” or “nudging” an object on the display to physically move it.

It is connectable to computers, tablets, smartphones, or the Orion TI-84 Plus Talking Graphing Calculator via a USB port or Bluetooth. Its open API allows developers to create apps to work with Graphiti. Additionally, an HDMI port allows connection to any device with a video display output. This enables any device to connect seamlessly to Graphiti.

Multiple Graphiti units can be interconnected to allow seamless interaction between users – what one user views or draws on their unit is instantly visible on the other connected units.  Graphiti can also connect to classroom smartboards and enable blind and visually impaired students to view it in real-time like their peers.  Teachers can also view and interact with the Graphiti screen from their computer or tablet.

The Graphiti also includes a Perkins-style 8-key braille keypad for entering braille text, a cursor pad for navigation, a standard USB host port and an SD-card slot for loading files for reading and editing in a standalone mode.

The proprietary Tactuator technology is fundamentally scalable and enables development of refreshable graphic displays of any size, at a fraction of the cost of graphic displays in the market today. The first Graphiti model has 2,400 pins in an array of 60 x 40 pins, and can be used in a portrait or landscape orientation. Each pin is independently addressable and can also be made to individually “blink” at configurable rates.

Independently refreshable pins in a 60×40 array
Independently variable height of each pin provides ability to present additional information for tactile graphics such as color or importance, and display pictures in relief
Pins maintain their state without consuming power and can be made to “blink” at configurable rates
Touch interface – allows drawing and erasing and multi-touch gestures such as pan and zoom
Compact and convenient size (11.6 x 10.6 x 1.6 inches), usable in portrait or landscape orientation

Connects to any computer or mobile device via USB, Bluetooth or as a monitor through the HDMI port
View, Create and Edit any image and save to SD Card, USB Flash Drives or connected devices
Share images with other connected Graphiti units or remote devices
Standalone viewing of files from SD Card
Perkins-style braille keypad
Haptic (vibratory) feedback
Configurable buttons for navigation and control
Standard USB host port for connecting Flash Drives and other peripherals
Fully upgradable via USB Micro-B device port
Operates from a user-replaceable rechargeable battery or AC adapter
Multiple USB ports allow simultaneous charging and connection to hosts and peripherals

Currently there are no reviews for this product. Share your opinion with others, be the first to write a review.
Related Products