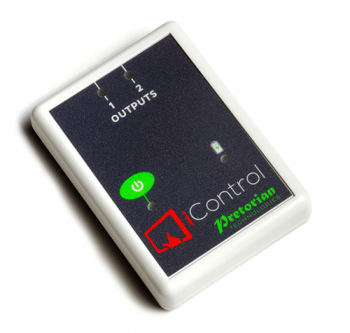 Simply plug your favorite appliance(s) into iClick and control them with switches or from your iPad in the following innovative ways:

Direct- toy/appliance is powered for as long as the user touches an on-screen switch on the iPad - a great way to teach cause and effect.

Latching- Touch once for on and again for off.

Timed- one touch turns the toy on for a period determined within the App, from as little as 1 second up to 250 minutes.

Cooperation- requires two users each to touch an on-screen button for the toy to turn on. Great for teaching social skills and cooperative play.

On/Off- One switch turns on the device and the other turns it off.

Two 3.5mm sockets to allow up to two toys or other appliances to be connected.
Seven control modes selected from the iClick App. Four modes provide independent switch operation; three give cooperative control.
Interference free operation at up to 60 feet distance.

The iClick App can also be scanned using iOS Switch Control by users who can’t use the touch screen.
Supports iPad 3 and later only (iPad not included).

** Note - Requires iPad 3, iPad Mini, iPad Air, iPad Pro or later. Will not work with First Generation iPad or iPad 2. iClick & iControl use Bluetooth Low Energy (Bluetooth 4.0) to communicate with the iPad. This feature was introduced with iPad 3 and iPad Air and is also available on all iPad Mini. Earlier devices will not work.