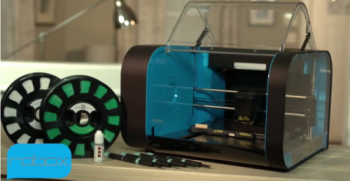 The quality of printing is predominantly dependent on the resolution and accuracy of the motion axes. The printer must be capable of laying down accurate slices of plastic material layer after layer to produce a usable part. We have designed Robox® from scratch, ensuring the frame and motion systems are extremely rigid and accurately positioned. All motors and axes are attached to a single stainless steel frame which is a reference surface for all motion; this is rigidly attached to injection moulded parts which form the body of the printer to create a super-stable platform.

Robox® includes a proprietary dual-nozzle system which can improve print speeds by up to 300% when set against our competitors. A single material feed can be directed out of one of two nozzles – with a 0.3mm or 0.8mm extrusion diameter. This means Robox® can produce highly detailed exterior surfaces for the surfaces you can see, and then quickly fill the object using the larger nozzle multiple layers at a time without affecting part strength or detail. This combined with a needle-valve system stops ‘ooze’ and ‘stringing’ from the nozzles – a problem commonly found in other printers. So now you can finally have the best of both worlds – a perfect high quality exterior finish with much faster print times!

All of the motion axes are coupled to a single sheet metal part, reducing the need for factory calibration and ensuring that your Robox® is perfect for printing straight off the production line. The use of injection moulded parts combined with sheet metal components produces a very rigid structure, while allowing for a stylish consumer product.

By using a ‘Bowden tube’ extruder, we are able to keep the weight of the printing head to a minimum, allowing for much faster extrusion and travel speeds without affecting print quality.

We have over-specified the stepper motors for all the motion axes, meaning Robox® should be able to cope with all future head developments without a hitch. We have used 2mm pitch belt drives for X and Y axes and our own custom machined 0.5mm pitch Z axis screw. All of the motors are custom designed for the printer. This gives us the highest theoretical accuracy on the market, and allows us to achieve super-fine layer height.

Due to the heated build platform, we can maintain approximately 50°C ambient temperature in the build chamber. This stable environment helps to maintain part accuracy and print quality by preventing uneven cooling. The problem with this feature is that this ambient temperature can be too hot for the motors and electronics which control the printer. These are all therefore outside the build chamber and actively cooled by outside airflow to keep everything running smoothly.

One of the major problems with almost all available 3D printers is that the bed must be manually levelled to ensure the first layer adheres correctly. This is be a fiddly process which has to be regularly repeated – a source of frustration for other 3D printer owners! Well, we’ve solved that. Robox® uses a proprietary bed probing mechanism which can measures the location of the bed before every print. As both Z motors are driven independently they can be adjusted to ensure the X axis is always parallel to the print bed.

The Robox® extruder contains the world’s first dual-pinch-wheel extrusion system. This allows for very consistent and reliable extruder operation with excellent resolution and control. The filament is fed to the head by two indexed contra-rotating feed wheels which are powered by a worm & wheel gearbox. This arrangement virtually eliminates the possibility of ‘stripping’ your filament, causing a loss of extrusion and poor print quality.

The filament extruder incorporates a closed-loop feedback system which monitors the motion of filament as it enters the extruder, giving it the ability to instantly recognise extrusion issues. The software can pause the print if any error is found, allowing the user or firmware to rectify the problem without ruining the entire print. A long awaited feature on 3D printers is ‘resume’ – the user can restart the print and it will continue from where it left off. Another first for Robox®!

Another problem that we have solved is ‘ooze’ -the stringing and over extrusion at the end of a section of printing. This happens due to the low viscosity of molten plastic. In most printers, this is solved by what is known as a ‘retract’, where the filament is rapidly reversed in conjunction with a very small melt chamber, however this is not always effective. Robox® overcomes this problem through the use of a needle-valve system which completely closes the nozzles at the point of extrusion, removing all stringing and ‘blobs’ from the part – resulting in an amazing surface finish.

AutoMaker is the software used to layout your models, view the status of Robox and adjust the settings used during a printing or other operations. AutoMaker is available to download and can be installed in most languages on many operating systems including Windows, MacOS and Linux. Without a Robox attached there is limited functionality, a user can load a .stl or .obj file and manipulate it. Connect a Robox to allow printing in Draft, Normal, Fine or Custom within 3 very simple steps. Opening the Advanced Tray enables a huge array of settings, each is clearly described and sorted into easily recognisable sections. Save custom settings if you want to repeat a print or share it with other users. Custom print settings are saved as text based .roboxprofile files in the users documents folder and a PrintJobs folder is created containing all the settings and code used for every print that is created. The goal from the beginning with AutoMaker has been to make 3D printing easier, we want users to concentrate on designing parts to print, not needing to fiddle with the print settings to try to get a result. Our default settings are tried and tested using our filament and allow even a complete novice user to get a repeatable and consistent result every time. Advanced users have all the control required to satisfy even the most complex print jobs and are able to easily share their custom profiles with all of us. 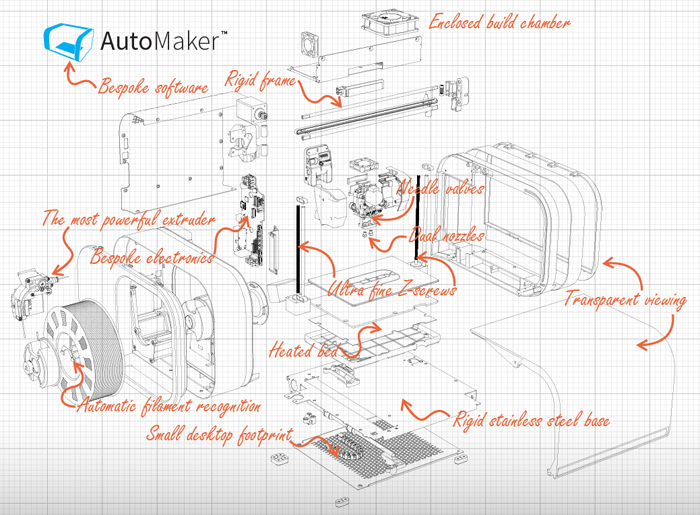 Robox materials are supplied on a SmartReel which holds data about temperature settings, print speed, diameter and even the amount of filament which has been used on that reel. As a user this makes printing very easy, you load the filament and AutoMaker will automatically change to the settings saved on the reel. Robox currently allows users to print in PLA, ABS, HIPS, Nylon, PC and PVA but we are constantly testing more materials. Data on materials and Material Safety Data Sheets (MSDS) are available on our materials page and will be revised and added to as information becomes available. Each release of AutoMaker™ includes the latest filament profiles for each filament, these are updated automatically when an unmodified Robox SmartReel is loaded. We and our users can also share the Filament profiles we create for materials not supplied on a SmartReel, these Filament Profiles are text files ending with “.roboxfilament”. Robox is able to use filament from any brand, we do not lock you into our SmartReel system. Obviously better quality filaments will give consistent results. To use another 1.75mm diameter filament you can just feed it in and tell Robox to get the filament data from a file rather than reading a SmartReel. You can download this file or create your own by copying the default Robox profiles and editing them within AutoMaker or via a text editor. You can also write your saved .roboxfilament data to a SmartReel at any time. 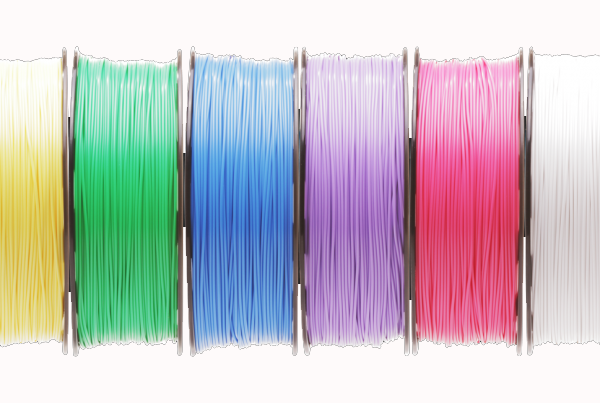 Build Volume: This is the maximum size of object that can be printed in one build.  Although a large volume is desirable a smaller print will always have a higher accuracy.
Best Layer Resolution: The thickness of each printed layer. Thinner layers mean more detail and accuracy.
Extruder Support: Additional extruders allow secondary print materials or colours.
Nozzle Diameter(s): The size of the material that is extruded from the nozzle effects accuracy and print time.
Automatic Bed Levelling: Bed levelling is a fiddly and time consuming problem for most 3D printer users.
Automatic Material Recognition: This allows the printer to set a huge range of print parameters without the need for user input.
Pause / Resume Prints: Vital to user sanity. If a print takes 3 hours and runs out of material in the last few layers a resume feature allows the print to continue where it left off.
Heated Build Platform: Some materials require a heated bed to ensure they stick to the surface and do not cool too quickly for good lamination.
Draught-blocking Enclosure: The temperature of the extruded filament is vital for layer lamination and controlled material shrinkage.
Replaceable Print Head: Swap for an upgraded or replacement head, or perhaps another type of material manipulation.
Internal Lighting: Watch your design appear in front of your eyes and get visual feedback from the printer.
Material Compatibility: What can I print with? Why would you limit yourself?
Assembled: Some printers need an engineering degree and a pot of luck to assemble and configure.
Software: Included software, makes the printer print. Should be dedicated and tuned your specific printer.
WiFi/Remote Connectivity: How the printer communicates.
Supported Operating Systems: Will it run on your system?
Price: Obviously some printers are seriously overpriced.