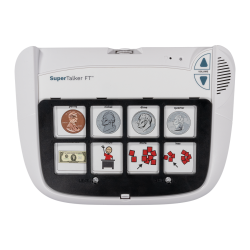 Use it as a single message communicator for beginners and progress to a two, four, or eight message communicator as the user's needs and abilities change. No need to learn a new device instead, simply change the keyguard / symbol holder. SuperTalker features 16 minutes of recording time and a total of 8 levels of messaging capability so you can store as many as 64 messages!

The NEW SuperTalker FT includes four interchangeable keyguards that can be used to create a communication device with one, two, four, or eight message locations. SuperTalker FT contains a Feather Touch activation surface that is sensitive enough to detect the lightest of touches. Eight recording levels give you the ability to record up to 64 unique messages.

Improvements to the new SuperTalker FT include:

Note: Symbols are not included.