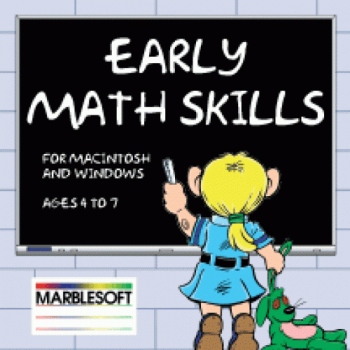 Seven activities and dozens of difficulty levels with dozens of teacher options make this program customizable for any student. Options include many ways of controlling the appearance and organization of the problems, how prompting and reinforcement is made, and some activity-specific options such as how color icons are displayed.

Teaches addition with the numbers placed horizontally (early Addition I) or vertically (Early Addition II) across the screen. The program will drill the student on sums from 2 to 9. The teacher can optionally select sums from 0 to 20.

More Than/Less Than teaches the relationship between numbers, starting with greater than and less than and progressing to include equal. The teacher can select numbers ranging from 1 to 5 up to 1 to 19. The default values are 1 to 9. Includes comparison of simple equations (1 + 3 < 2 + 4).